I can't quite believe it's going to be March tomorrow. Probably the main reason for time flying is that I've gotten started on a few of my major responsibilities. The most time-consuming one right now is teaching New Testament 3 (the third in a 3-part survey) to undergraduate theology students. 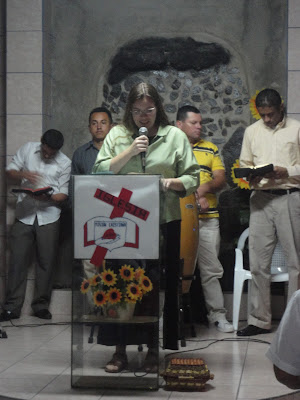 I also preached my first sermon here, way back on the first Sunday of February. My manuscript is available here, for those of you who read Spanish. Preparation for both preaching and teaching take much longer in Spanish, but I'm very happy to be able to communicate, even in a basic manner. I thought it was a good exercise to have to preach in fairly basic language, and I was happy with how it went, especially for my first time. Even more than the language, the challenge that I felt most in preaching was not knowing the congregation as well as I usually do. I look forward to preaching again as I get to know people even better.

As we've mentioned before, la Misión uses music a little differently in their services than what we were used to in the states. For starters -- and I say this as someone who used to be involved in organizing music for weekly services -- I am astounded at the sheer number of songs the musicians (and church members) have memorized. There are no hymnals and no sheet music and yet they manage to pull off a 7-8 song service five times a week. And they have day jobs! Totally awesome.

Part of this is that they use a lot of popular music in worship, and (I think) Christian music is a lot more mainstream down here than in the states, so everyone knows the words. We've often heard church songs blasting out of taxis. Anyway, we're slowly learning the songs that get used in worship a lot. I usually try to remember some of the lyrics and then track them down online when I get home. I thought I would share a little of what's popular down here. Enjoy!

The first song -- El Señor Es Mi Pastor -- is super widespread although I should warn that this version (by Danilo Montero) is a little sleepy compared with how la Misión folks play it. The loud drums and guitar and the echo-y concrete sanctuary give it more of a fast-paced, garage-rock feel. Try to imagine it being played by the White Stripes. Or perhaps the White Stripes as fronted by Aretha Franklin, since there are no shortage of awesome women singers. (Lyrics here.)


Continuing in the soft rock tradition (a genre that is surprisingly popular in Nicaragua!), this one is called La Niña de Tus Ojos, which is actually the idiomatic translation for the English phrase "the apple of your eye" (literally, "the girl of your eyes"). Song by Daniel Calveti (lyrics here, sorry about the Mel Gibson).


And to close it out, Sube! Sube! Sube! la Alabanza. This one is more energetic, something you can actually dance to (lyrics). The chorus (which means "up! up! up!" more or less) has become sort of a rallying cry in our house for all manner of things.