Laura Jean and I just finished co-teaching a class at the university called Cuidar la Creación: Medio Ambiente, Ética y Teología (Caring for the Creation: Environment, Ethics and Theology). It was a class that combined environmental science and theology -- I'll let you work out which of us taught which parts -- and it was totally a blast, a really fun and rewarding experience. Right now we're gearing up to teach it again starting in a few weeks.

On the science side I talked about how ecosystems work, the carbon cycle, the nitrogen cycle, photosynthesis, food webs, ecosystem services, climate change, deforestation, environmental health and more. Good nerdy stuff! We also touched on some ethical and policy issues such as the Tragedy of the Commons, Environmental Justice and the international climate negotiations. On the theology side, Laura Jean began in the beginning with the creation story and its call for humans to "till and keep" and be good stewards of the land. She also touched on the clear connection between the environment and the biblical call for justice, along with newer lines of thought such as ecofeminism.

The main goal of the course was to start from the students' experience of their own environment and then to apply what they learned about science and theology to their own communities and churches. The first homework assignment was an essay asking them to describe an environmental problem in their town or neighborhood, and to think about what the costs were to the community and whether or not anyone benefited from the situation. The results were a fascinating glimpse into the ground-level environmental problems in Nicaragua.

In a large class of nearly 40 students, a mix of urban-dwellers and campesinos, the three biggest problems identified were the following: (1) trash disposal and open trash heaps, (2) contamination of rivers and lakes, and (3) problems connected to clear cutting and deforestation. Teaching is a wonderful thing because you can learn so much from your students. Here's what I learned.

Anyone who has visited Nicaragua will have noticed the trash problem. In Managua the streets and gutters and canals are clogged with trash. Trash cans and dumpsters are non-existent and a culture of littering is well-established. The government has been working at improving the trash pick-up system, but many neighborhoods still suffer from unofficial dumping spots. Until recently, Managua was home to Central America's largest open-air trash dump, La Chureca, where hundreds of families lived by picking through the trash. (La Chureca was recently sealed and converted to a modern trash treatment dump thanks to a large aid package from Spain, and the families living there were given the option of employment at the recycling and sorting center.)

Among the students in the class, there was a pretty strong consensus that trash was Nicaragua's biggest pollution problem. Essay after essay recounted the same story told in a different barrio or pueblo: open-air dumping pits, children living nearby, no help from the government and a lack of concern by too many people. The trash is a clear public health threat, in addition to being generally unpleasant to live next to. People joke cynically that the Nicaraguan national flower is the plastic bag, which can be seen fluttering in the fields all around the country. The culture of littering goes hand in hand with a lack of infrastructure for dealing with the problem, and an explosion in the availability of disposable stuff -- all of which makes it a tough problem to solve. This year the government rolled out a big initiative called Vivir Bonito, Vivir Bien (Live Beautiful, Live Well), in hopes of making a dent in the problem.

Trash is also clearly connected to the second problem - the contamination of the lakes and rivers of Nicaragua. The country is home to two of the largest freshwater lakes in the Americas, Lago Xolotlán (Lake Managua) and Lago Cocibolca (Lake Nicaragua). Lake Managua is severely contaminated, thanks to many decades of industrial dumping by factories that no longer exist, but whose contamination lives on after them. The lake also receives runoff from the city of Managua, which went largely untreated until recently. Cocibolca has avoided most of the extreme contamination of its sister to the north, but is currently at the center of the debate about the proposed trans-oceanic canal through Nicaragua.

In rural areas, overuse of pesticides are one of the major sources of water pollution. In Chichigalpa, one of the major sugar cane-producing regions, is currently experiencing an epidemic of chronic kidney disease. Hundreds of young, healthy men working the sugar cane plantations (owned by Nicaragua's wealthiest family, the Pellas) are dying from kidney failure. The disease is especially tragic since it strikes the young and advances rapidly with no cure. And while it has been difficult to pinpoint the cause of the epidemic, some combination of contaminated water and extreme dehydration seem to be the likely culprits. One group of students from that area of Nicaragua did interviews with community groups and workers as part of their final project for the course (more on which soon).

Since the end of the civil war, Nicaragua's agricultural frontier has pushed further into the eastern rainforest. The main culprit, and the eventual endpoint of the land, is cattle ranching -- profitable but destructive. In twenty years from 1990 (the end of the civil war) to 2010, Nicaragua's forested land shrunk from 37% to 25% of the country (FAO 2010). The maps shown here (Liscow 2012) show the tremendous deforestation in the center of the country, from 1983 to 2000. 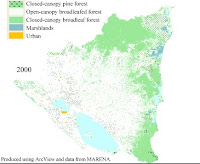 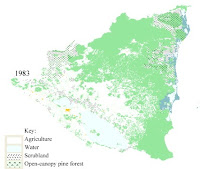 This deforestation is something we have seen first hand on our trips to the campo, and it is one reason behind the church's biodigester project. We have heard time and again from small Nicaraguan farmers about the harm that comes from not conserving the forests -- lack of firewood, erosion, loss of springs and water sources, floods, loss of wildlife and big changes in rainfall patterns.

According to many of our students, the various churches of Nicaragua are asleep when it comes to environmental issues. Several students have told us that the churches are perhaps overly focused on the soul and the hereafter that they forget the body and the present world. But environmental problems continue to grow and occupy a larger space in the national conversation, it's not likely that the churches will remain quiescent for long, at least not if our students have anything to say about it.
Posted by t at 10:31 AM No comments:

For a little bit of Friday night music, here is Nica singer-songwriter Katia Cardenal's "Mariposa de Alas Rotas" (Broken-Winged Butterfly). Today we sat in on a thesis defense given by a student for her Masters in Feminist Theology. It was a very powerful presentation about the sexual exploitation and trafficking of girls and young women in Nicaragua, and their perceptions and perspectives on God, and the church. It was a grim, enraging topic presented in a hopeful manner, touching on the concept of resiliency in the face of adversity. This song was the presentation's theme music, as Katia sings here ... a broken-winged butterfly, against the hurricane...